A few pictures started doing the rounds on social media from a recent campaign by Nabila’s Salon. The photo-shoot, led by stylist Khoji, featured the beautiful model Zara Abid and was photographed by Umair Bin Nisar.

The editorial came under fire for attempting to make the model’s skin appear darker in order to empower darker skin tone. The concern with using Zara as a model raises questions over why a model with the desired skin tone wasn’t used instead.

The outrage on social media was massive and the team was called out for not making mindful decisions and misrepresenting ethnicity:

What is this black face?
In this day and age they really tried it..
If you wanted a girl this dark could’ve hire one!!!! But wow #blackface 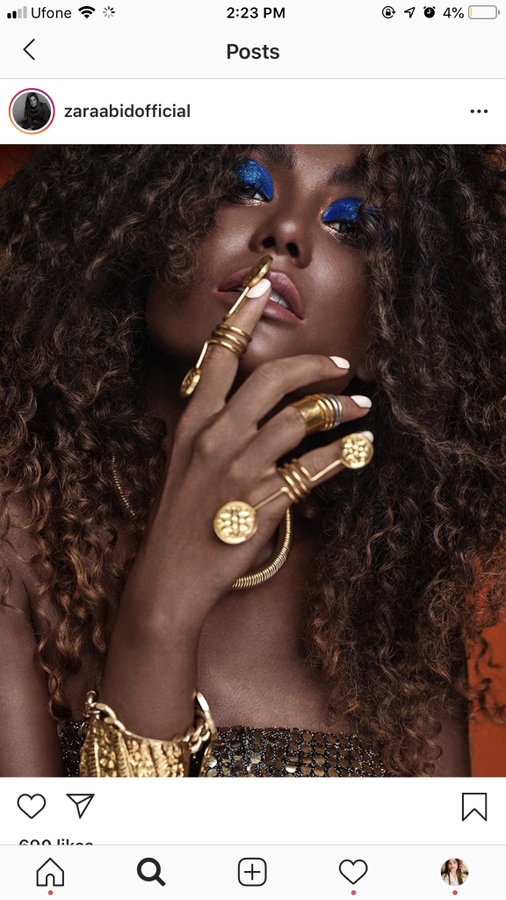 u t s u k u r u@animinority

However, the model and the makeup artist think otherwise. Zara and Nabila took to social media to defend their campaign, calling the backlash surreal.

“It doesn’t matter if you are black white or in between. I’m amazed at the backlash. A stylist has received for using a dark model , and enhancing her skin tone,” she wrote on Instagram. “He is being bashed for doing a beautiful and artistic shoot with gold jewellery on dark skin. Why do the trolls have to equate being dark with African? Have they not seen how dark and gorgeous the South Asian women are?”

She further added, “Why are they not represented or celebrated? Why do we still believe white is supreme? When will we shed our colonialist mindset? The world is becoming a melting pot.”

Zara, on the other hand, shared how agencies won’t hire her because of her skin color.

“I’m the first hand victim of discrimination and colourism that exists in the society,” the model shared on Instagram. “The pictures shared of the shoot that have been circulating have been misconstrued and manipulated by the social media users who are often too quick to jump to conclusions.”

“There is a lack of representation among our dark skinned girls. Why? Because people want to see fair faces donning products as there is a longstanding and deeply-seated colonial insecurity that has always been a part of our society.”

Zara went on to add how her skin tone was made to appear two or three tones lighter in other shoots, so what harm did the dark skin do?

“Why didn’t people stand up when I was portrayed as a lighter skin tone and are only enraged when I’m trying to represent the darker side of my population?” the model questioned. “It’s high time we stop shaming dark skin and embrace it with open hearts and mind.”

“I’m compelled to address something that has been making the rounds on social media,” he shared in a statement. “The recent shoot that I uploaded became the target of cultural misappropriation and colourism/racism. The fact is that the reaction to the shoot has been blown out of proportion, largely misconstrued and heavily manipulated.”

He further said, “Zara Abid is a dark skin model. She is stunning and utterly unapologetic about her complexion. However, people are ignoring her natural skin tone, choosing to lighten it up through makeup and photoshop. This shoot is not a representation of any particular culture.”

“Brown is beautiful, dark is divine and all complexions are equally stunning,” he continued. “Shame on you guys for shunning these dark skinned beauties. Our freedom of speech, expression and creativity must not be hijacked by narrow-minded, superficial, judgmental people.”

The Finale Of Dew Gamers Arena Was Everything The Crowd Had Expected And We Can’t Stop Talking About It!

Amna Haq’s latest transformation came out as a shock for everyone!

Aisha Khan finally shares her fiance’s picture with everyone

‘I would love to work in Pakistan’ – Govinda

PFDC Sunsilk Fashion Week to be held in March

‘Miley Cyrus’ reminisce to bring back ‘Hannah Montana’ on TV.

Selena Gomez to fight depression for the rest of her life